My Book of Senegalese Stories: Reflections on Gorée, An Island of no return

“Visitors, in your grievous smile, I like to read the victory of love”

The above quote by the late Boubacar Joseph Ndiaye – founding primary curator of the Slave House of Gorée Island summarizes the mix of my emotions as I stepped foot on this island just a 20 minutes boat ride from Dakar, Senegal.

While I do hope to eventually put up a blogpost about my different experiences (across Senegal- My Book of Senegalese Stories ( as seen here, here, here, here, here and here in pictures), I could not bear to leave Dakar without penning my thoughts about Gorée and its Slave houses, of which it is said;

The story of Gorée island is the story of how millions of men, women, and children from all over west Africa were sold off into slavery, never to return again to lives familiar.

It is important to note that the Europeans did not introduce slave trade into Africa, as it had indeed been an ancient practice ,though at a lesser scale; the aftermath of wars and other disasters. But what the Europeans succeeded in doing was to exploit the practice and raise it up to great scales, especially to meet the demand for labour from the plantations that were springing up in the Americas.

Gorée, despite being sterile and having ‘seemingly received from nature none of the gifts that ensure to humans an exceptional destiny’, was yet particularly strategically located on the West African coast  and was to become a home to horrors, far beyond words!

GOODE RED called it the Dutch

Which became GOREE for the French

Names sullied with blood and evoking a sad past” – Joseph Ndiaye

Originally called BER by the diary owners who mostly lived on fish caught at the banks of the island avoiding interactions with the mainland. At the advent of the Djolof empire in the 7th century( which gave rise to the Wolof people in present day Senegal), it seems several of the island inhabitants converted to Islam and in the 11th century migrated towards a better life on the mainland leaving the island deserted and unoccupied as witnessed by the first Portuguese navigators , before the Dutch  in 1588 renamed the island ‘Goede Reede’ meaning safe haven in Flemish.

In 1617, it was sold for a few iron bars to the Dutch. In 1633, Gorée was to become a transiting hub under the control of the Dutch company of the East Indies that dominated the seas and held the monopolies of spices.

However, it was not until 1677 that the slave trade on the island reached staggering proportions via trade by barter , the unit of currency being the iron bar or an assortment of rifles, fabrics, powder kegs or barrels of spirit. Products which were to have disastrous consequences for the population; spirits eroded the strength of those who used them without restraint, while arms facilitated  the destruction of people and assets at a large scale.

The quality of iron bar proposed depended on the age and bodily condition of the slaves. The highest bidded races were the “Yoruba” ( incidentally my tribe) from Western Nigeria who were considered as good breeders and were often called “stud slaves” or stallions” These stud slaves served as reference points for setting prices.

The slave trade did have great political, economic and demographic consequences for Africa, as not only did it destroy the political structure of many states, it turned traditional moral values upside down, with the strongest selling the weakest, thus ensuring long-enduring tribal and family feuds.

I regret that for us Africans  white slave traders be anonymous

But what I find more difficult to accept

I took a taxi from the Alamadies area where i was staying in Dakar, and disembarked at the Embarkation Point near downtown Dakar. I was just in time for the 5pm tour and quickly paid about 2500 CFA (about $6 ) for the boat trip.

While waiting to embark, I was approached by a photographer who offered his ‘professional’ services in his passable English which was a million times more understandable than my attempts at speaking French. A few minutes later, a ‘professional’ tour guide who was apparently born on Gorée Island and spoke even better English approached me, and so it was that I embarked on the trip with my own entourage-a photographer and an English-speaking Gorée island-born tour guide.

As we approached the island, and could sight the Estree fort, a circular construction and the  northernmost part of the isle which is said to be one of the earliest buildings on the island,  the boat- Coumba Castel-  took a slight detour, upon which my guide remarked that we could not approach the island directly as there were sunk ships beneath the surface of the water, which had been felled by guns that we were to come across later.

On disembarking , we quickly headed to the slave house which would be closing soon for the day.

May this be preserved with the same care then today

The slave house shown below dates back to 1776, and was the last built slave station by the Dutch (earliest ones date back to 1536 by the Portuguese). It was one of several built in the same format -two stories as were all other buildings on the island. The staircase with two wings built with full-cement railing was a symbol in that it gave access to the quarters of the masters upstairs isolating them from the hell-like life obtained downstairs by the slaves.

Below, you can see the central corridor downstairs which leads out to the sea: death or a voyage of no return.

The master’s floor above with its high ceilings, and the slaves rooms below with low ceilings, surrounded by galleries in which were guards ready to shoot.

Horror is human, Error too

Around the Slaves Quarters 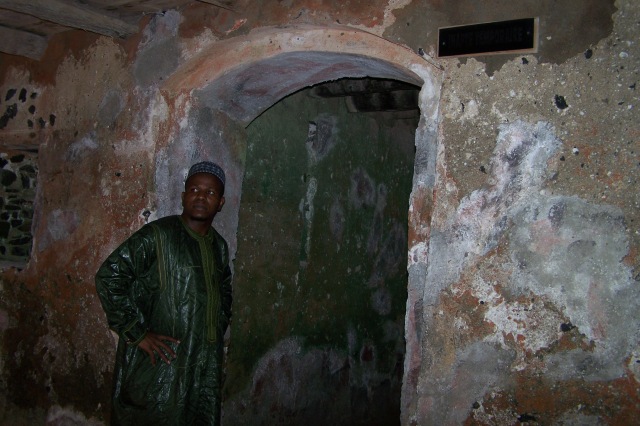 At any point in time, this single building housed about 150- 200 slaves (men, women, and children) kept in different cells.  Some of the rooms had as many as 60 men in them , with their backs to the wall and with shackles on their necks and arms. They were freed only once a day to enable them relieve themselves and sometimes, they room was their toilet!

Since families were separated, it was common o find one whole family; father, mother, and child all separated.

It was not unusual to find out that several times the slave traders would rape the women, and when they were unable to forcibly abort the pregnancies, the mullato children born were sent off to be free on the island or sent off to St Louis in the north of Senegal.

The most obnoxious effect of slavery

Is perhaps the myth of superiority

Or the inferiority linked to the color of one’s skin 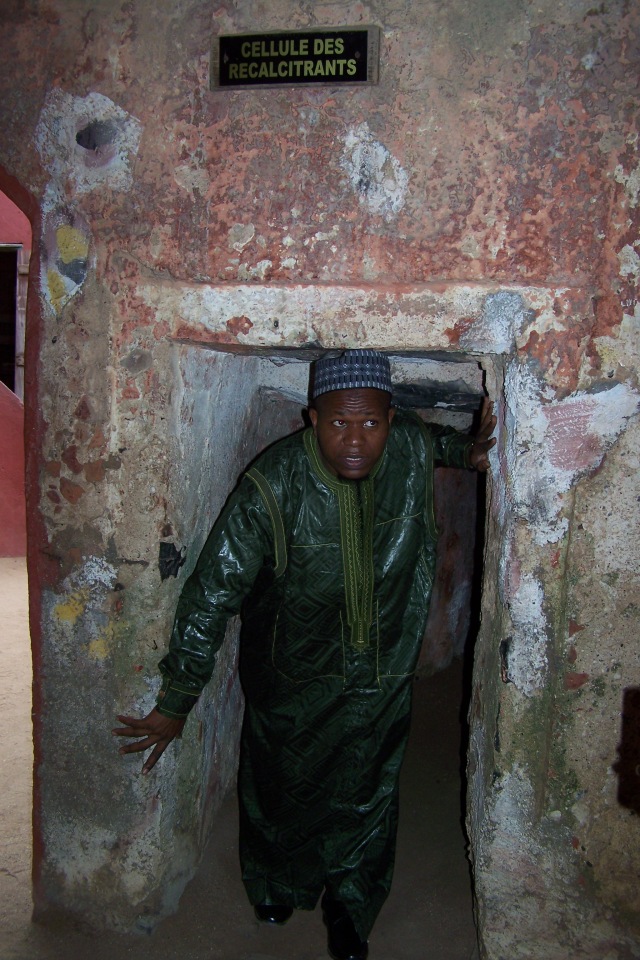 For those prisoners ‘stubborn’ enough to defy their masters, or reluctant to accept their plights, there were even smaller dungeons that could barely fit a small child. Some of them would be locked naked in these rooms filled with salty water  from the sea for days on end!

According to my  tour guide,  Mandela on his visit here in 1991 after his release from prison requested to be be left alone for about 27 minutes in one of these small cells!

How eloquent they are, these mute witnesses of our history

In these momentous times ,

Undoubtedly the most tragic, the most ferocious 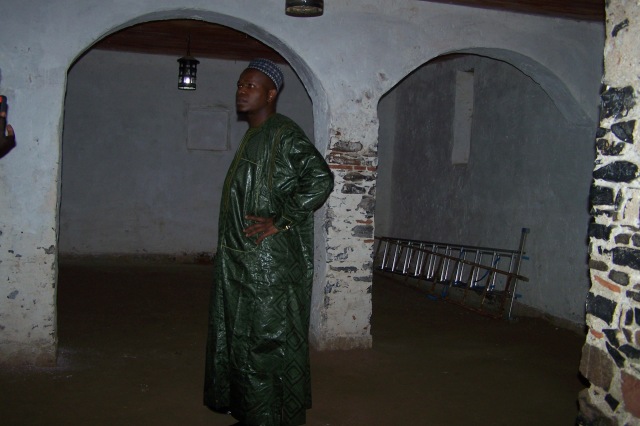 For a man, his price depended on his weight (60 kg was a target weight) , and his muscle strength. If a man was not up to that weight, they had some rooms where they were put in to be fed until they reached that weight and then were auctioned like cattle in front of the European buyer leaning over the top balcony to evaluate the strength of each slave. The value of children depended on their tooth growth and that of a woman on the firmness of her breasts.

The Door of No Return

Once the prices were agreed on, the slaves were moved to the waiting rooms to await the ships.

Looking out onto the sea was a door leading out to a palm-wooden docking wharf. This door was referred to as the ‘Door of No Return’. Here, as a last resort, some of the slaves would attempt the impossible task of escaping.

However, they were either gunned down by guards ( who were freed slaves!) or devoured by roaming sharks (who had been attracted to the shores previously as sick or dead slaves were usually just thrown out to sea).

Either way, once one passed through that door, it was the point of no return! Death, sharks or plantation!  Death or a voyage of no return.

Each drop of tears

From their broken hearts

And ocean of blood

Springing out of this steel fortress

From this point, their departure to the Americas depended on the buyers; the father would end up in Louisiana, USA, the mother in Brazil/Cuba, while the child would be sent to Haiti or the West Indies. They would leave without their actual names but rather with registration numbers and would take on the names of their masters once they arrived in the plantations.

Could America be America without the Black people?

With the new curator 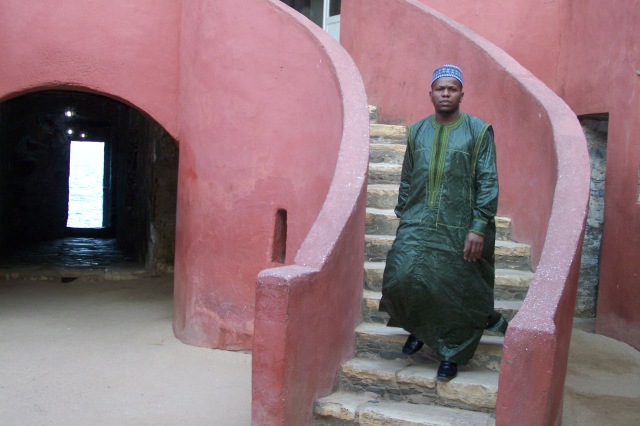 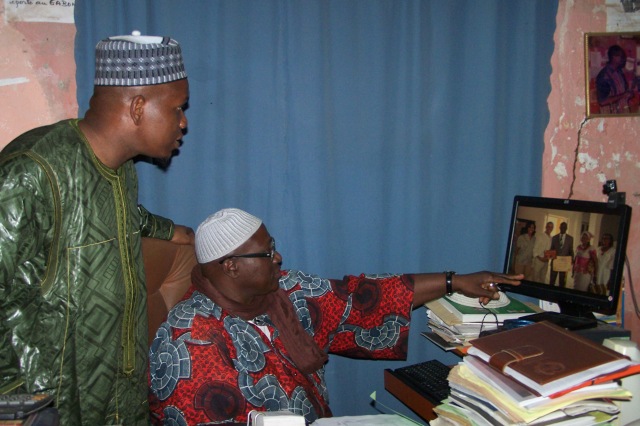 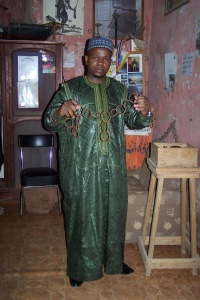 The founding curator of the slave-house, Boubacar Joseph Ndiaye  passed on in Dakar in 2009 at the age of 87 years. Hence, I met the new curator who also had several memories to share (he has been working here for over 20 years but only became the curator after Boubacar died). He shared with me pictures he had taken of visits by several notable individuals including President Barack Obama and his family in June of this year.

May the sufferings of this historical island and this slave house

Be the fertile heaven of a blissful and fraternal morrow

Walking around the island, I was able to observe some artists at working using only natural materials for their paintings. They would start with sands of various colors  from several parts of the continent, and then use the Arabica gum and the baobab sap to complete the amazing  paintings. 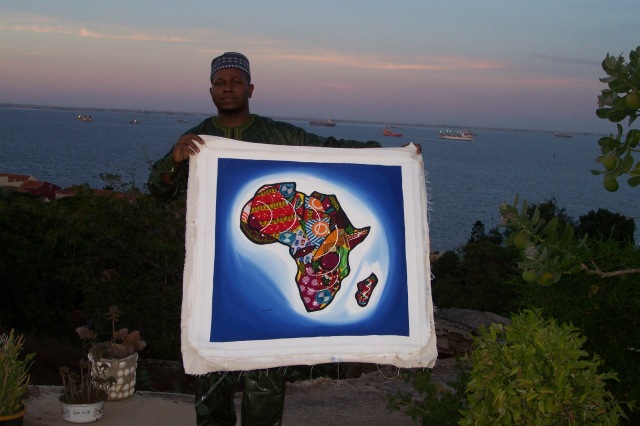 On the way, I snagged a beautiful cloth-threaded map of Africa.

I also tasted the baobab fruit from which the Buyy drink common across Senegal is made. 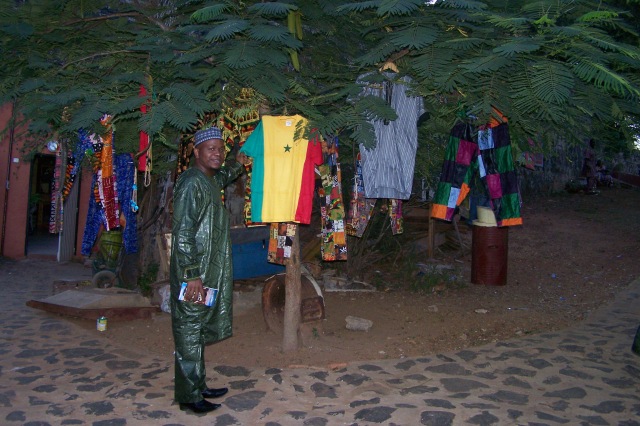 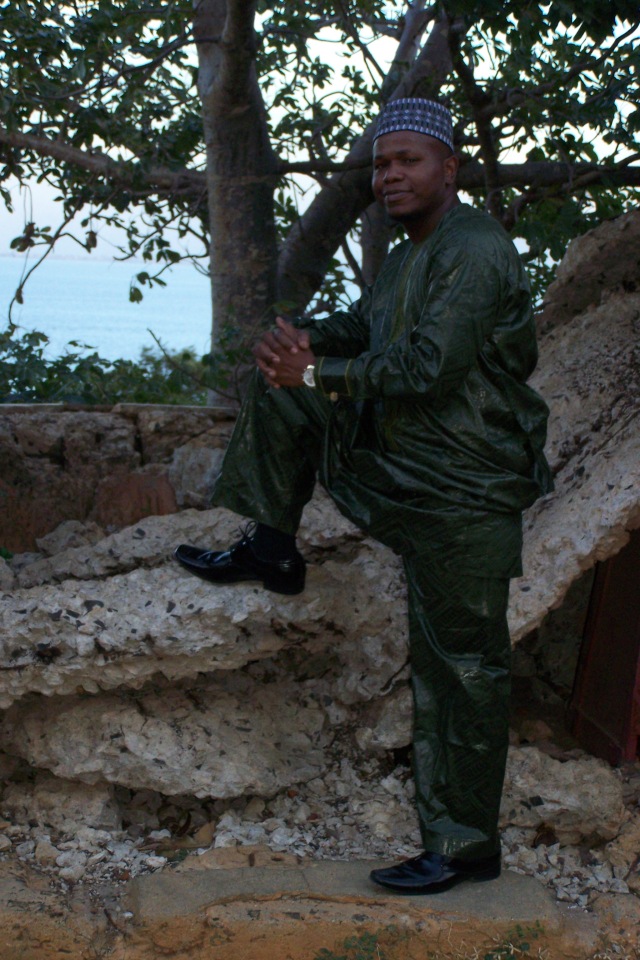 While the inhabitants of the island live life as usual, one can still find remnants of a military past by the remnants of the straggling cannons. I was especially surprised to find that the big canon, rather than facing away from Dakar (to attack its enemies) was pointing towards Dakar!

As I roam across the cities of the world, I am always trying to catch sunrises and sunsets, and I got to the top of the island just in time to witness the run setting over Dakar. A truly beautiful sight to behold!

It was now dark, and as I was not planning to sleep on the island (several tourists do sleep over), I took the ferry back to Dakar, and while truly sad at what millions of my ancestors had gone through on this island, I was glad to return safely from the island of no return! 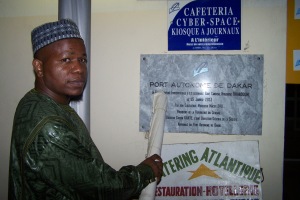 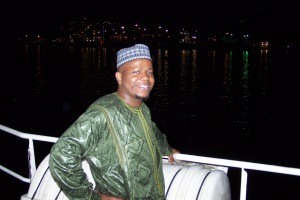 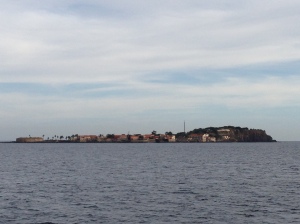 “May Africa never refuse to others, that which the world long refused to her; liberty!”

Most of the historical facts and quotations are taken  from ‘ The SlaveHouse of Gorée-Island ‘ authored by Late Boubacar Joseph Ndiaye- Principal Curator of the Slave House.

2 Responses to My Book of Senegalese Stories: Reflections on Gorée, An Island of no return