My book of Senegalese Stories; ‘Run like a Happy African’ edition

It’s my 2nd day in St. Louis, a tiny fisherman island on the northern shores of Senegal, built and patterned after New Orleans, back when it used to be the capital of Francophone West Africa before Senegal’s independence.

I am here on an innovation working tour to work with local tech hubs and entrepreneurs creating local solutions to local problems. 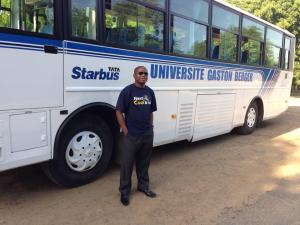 I manage to get up at 6am for an early morning walk around the island before the sun gets a chance to say Bonjour. Since I did not bring my running shoes along ( so as to take a break from running) I enjoy the walk and take pictures of the beautiful scenery, and manage to catch the splendor of the sunrise. 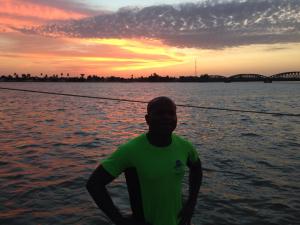 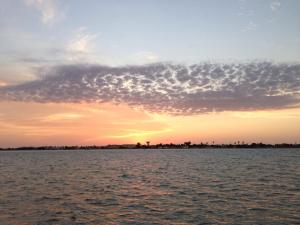 I soon tire of walking and decide to take a boat across to the other part of the island.

A short time later, I see the popular horse -carts that the villager use to move about. Since I don’t speak Wollof or French, I just jump aboard and indicate to him to take me around. He whips the horse into moving on, but very soon, without asking for my permission, he stops to pick more passengers and luggage. After a few minutes , I indicate to him I want to stop as sitting on the edge of a cart over bumpy roads is pretty uncomfortable.

We then have to haggle incomprehensibly over the price in different languages, before I bring out my iPhone calculator app and he punches 10000 CFA ( about $24) on the calculator.
I respond by punching 500 CFA telling him it’s been a bumpy ride along with other passengers and that even a taxi is not that expensive. He retorts that it takes both his energy and that of the horse for the cart to move. We go back and forth punching numbers on the iPhone and finally settle at 2500 CFA and a photo op. 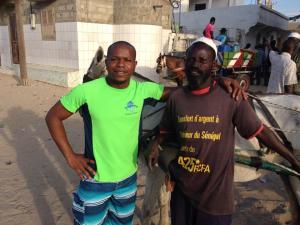 Just as I start to walk back to my hotel, I see thousands of people, young and old gathered at the old town square and find out today is the annual St. Louis 10km race. 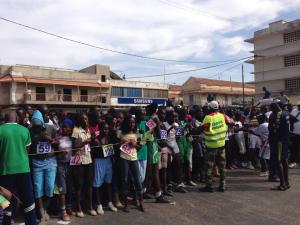 I quickly sign up on a piece of paper, before I remember I have no running shoes. I manage to find a street cobbler who then rents me some terminally-sick- looking shoes that seem to have been picked up from a dumpster for $5000 CFA but they are my size and it will do.

Its 9am and the sun is beginning to come out. There are a series of kids 3km and 4km races and by the time those are completed, it’s 12 noon and the sun is really angry. I check the weather and it’s 38 Celcius( 100F). That’s like Houston at the height of summer!

Soon it’s time, and I can’t get out again. Not that I am going to give up on the chance to run my first race on African soil, surrounded by my own people. But I quickly realize its a no frills race.

I go off on a jog trying to pace myself but the Senegalese runners actually run off as if it’s a sprint! And while I have a small bottle of water in my hand, most of them have nothing.

After finishing my water within the first mile, and stopping twice to buy more water to drink and drench myself in, I quickly realize I am not winning or setting any personal records, and thus decide to fully enjoy the race. I take pictures of the views and the spectators and even pause to take pictures with the onlookers. Every two miles, there are race officials handing out wrist bands. 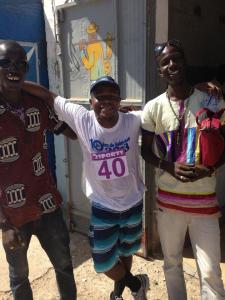 By the 3rd mile, we are back to the starting point for another loop and I practically waltz and dance my way in, to the admiration of the crowd accompanied by African drummers.

By this stage I have no coins left to buy water, and I have to just drop my last 2000 CFA to get some water. I can’t even find bottled water and I am in no position to discriminate against the sachet water or even the ones in manually-tied plastic nylons. It’s all water at this point!

Very soon I am running past the amazing Faidherbe Bridge and into town through the market to the cheers or boos of onlookers ( it’s all in French so I don’t know the difference). I keep up a happy smile and keep running along. Some runners attempt to chat with me but we are unable to find a common language. For the onlookers, I assail them with a mix of Salam alaykum, Cava, and Nangadef. Arabic, French, and Wollof!

I have now gotten so thirsty and so I resort to grabbing water satchets out of the hands of bemused bystanders who are too shocked to resist. At this point I don’t care, I just want water. And yet the Senegalese runners keep running.

My timer says its 6.2 miles which should have been the equivalent of 10km but I can’t see the end in sight. I keep on going and digging deep.

I am drenched in sweat and put up a smile as I run past my hotel. Very soon I can see the huge crowds at the finish line. And then it’s suddenly over. I am home! I check the timer and it’s actually 12km (7.65 miles) and I have managed a respectable 10:45 min per mile despite the conditions. 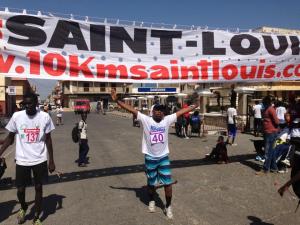 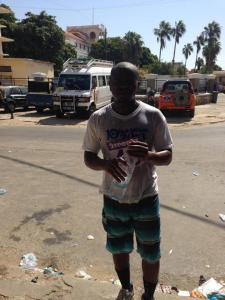 I remember to return the rented shoes. 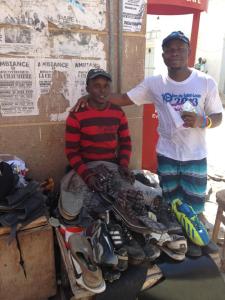 Then  take a quick shower , and head to the innovation workshop armed with a potent mixture of adrenaline and creative juices. Let the work begin! 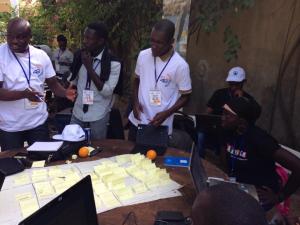 Afropreneur & Partner, LoftyInc Ltd (Operators of the Wennovation Hub) Leading expert in deploying technology and innovation to drive public sector reforms and enabling good governance. Passionate about bringing about positive change in Africa through innovation and entrepreneurship!
View all posts by Idris Ayodeji Bello →
This entry was posted in Uncategorized. Bookmark the permalink.

3 Responses to My book of Senegalese Stories; ‘Run like a Happy African’ edition